1. Global Participation
2. Global Core and Periphery
3. So how useful is Globalisation?

What is Globalisation
The term Globalization (or globalisation) refers to processes of international integration arising from the interchange of world views, products, ideas, and other aspects of culture. Advances in transportation and telecommunications infrastructure, including the rise of the telegraph and its posterity the Internet, are major factors in globalization, generating further interdependence of economic and cultural activities.
Though several scholars place the origins of globalization in modern times, others trace its history long before the European age of discovery and voyages to the New World. Some even trace the origins to the third millennium BCE. In the late 19th century and early 20th century, the connectedness of the world's economies and cultures grew very quickly.
The term globalization has been increasing use since the mid-1980s and especially since the mid-1990s.[6] In 2000, the International Monetary Fund (IMF) identified four basic aspects of globalization: trade and transactions, capital and investment movements, migration and movement of people and the dissemination of knowledge.  Further, environmental challenges such as climate change, cross-boundary water, air pollution, and over-fishing of the ocean are linked with globalization. Globalizing processes affect and are affected by business and work organization, economics, socio-cultural resources, and the natural environment.
Adapted from Wikipedia
Key Terms


The KOF index is a score each country is given out of 100, the higher the number the more Globalised the country is considered to be.

The KOF Index of Globalization measures the three main dimensions of globalization:
In addition to three indices measuring these dimensions, we calculate an overall index of globalization and sub-indices referring to
To view the actual weighting of each variable download the following document:

Although the KOF index can give us an idea of overall globalization, it has got some critics, particularly about the accuracy and relevancy of the data. Criticisms include:

There is also an argument whether it is good or bad to be at the top or bottom of the globalisation list. Some people may say it is good because there is cultural diversity and that you have access to people and products from around the world. Others may argue that this is a bad thing because your culture is being lost and that your country is possibly becoming more homogenised.

Make a note of some examples of where countries are on the KOF globalization index - Chose 2 high, 2 middle and 2 low examples (give the countries their score)

The world can be perceived as a core / periphery dichotomy where core countries are characterized by high levels of development, a capacity at innovation and a convergence of trade flows. The core has a level of dominance over the periphery which is reflected in trade and transportation. Accessibility is higher within the elements of the core than within the periphery. Most of high level economic activities and innovations are located at the core, with the periphery subjugated to those processes at various levels. This pattern was particularly prevalent during the colonial era where the development of transport systems in the developing world mainly favored the accessibility of core countries to the resources and markets of the periphery, a situation that endured until the 1960s and 1970s. The semi-periphery has a higher level of autonomy and has been the object of significant improvements in economic development (China, Brazil, Malaysia, etc.). The accessibility of the semi-periphery also improved, permitting the exploitation of its comparative advantages in labor and resources. 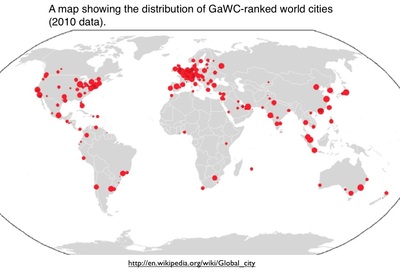 So How Useful is Globalisation?