The water cycle, also known as the hydrologic cycle or the H2O cycle, describes the continuous movement of water on, above and below the surface of the Earth. The mass of water on Earth remains fairly constant over time but the partitioning of the water into the major reservoirs of ice, fresh water, saline water and atmospheric water is variable depending on a wide range of climatic variables. The water moves from one reservoir to another, such as from river to ocean, or from the ocean to the atmosphere, by the physical processes of evaporation, condensation, precipitation, infiltration, runoff, and subsurface flow. In so doing, the water goes through different phases: liquid, solid (ice), and gas (vapor).

The water cycle involves the exchange of energy, which leads to temperature changes. For instance, when water evaporates, it takes up energy from its surroundings and cools the environment. When it condenses, it releases energy and warms the environment. These heat exchanges influence climate. The evaporative phase of the cycle purifies water which then replenishes the land with freshwater. The flow of liquid water and ice transports minerals across the globe. It is also involved in reshaping the geological features of the Earth, through processes including erosion and sedimentation. The water cycle is also essential for the maintenance of most life and ecosystems on the planet.
(Wikipedia Definition) 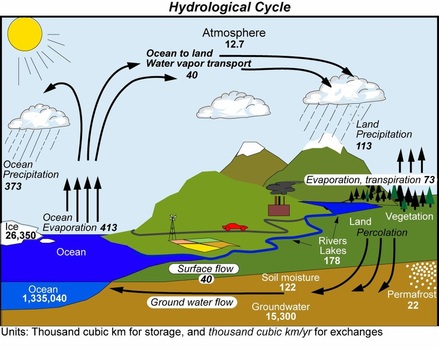 The changing balance of water

Due to rising global temperatures there are many concerns that there will be a change in balance in the Hydrological cycle. Melting ice caps along with the thermal expansion of the seas causing Eustatic and Isostatic changes on our planet.
Visit section in Oceans and Their Coastal Margins for Presentation on sea level changes.
Coastal Margins

Complete the 4 activities found on the this Link 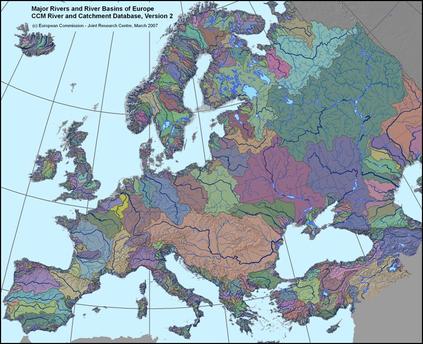 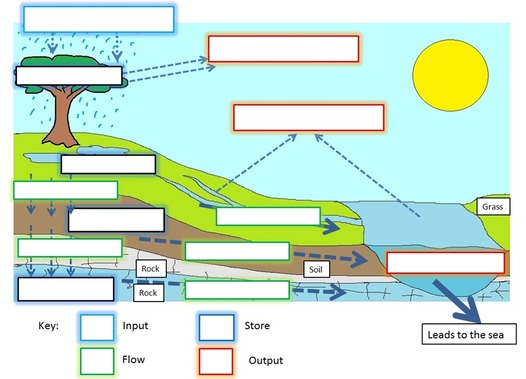 The regime of a river is expected to have a seasonal pattern of discharge during the year. This is due to factors such as climate, local geology and human interaction. Equatorial rivers have regular regimes but in the UK where seasons exist one or two peaks may be recognisable.

Simple regimes
These show times of high water levels followed by lower levels. They exist as a result of a glacier melt, Snowmelt, or seasonal rainfalls such as monsoons.

Complex regimes
If a river has more than one period of high water levels and/or low water levels, a more complex regime results. It is more common on large rivers that flow through a variety of relief and receive their water supply from large tributaries, for example, The Rhine.

Download File
Drainage basins all have a variety of characteristics in terms of vegetation, geology, soil type and so on, all of which interact to influence how quickly or slowly river discharge increases after a storm. Images A and B give an example of how a storm hydrograph can be impacted by the land around it.

Project: Storm Hydrographs
To create a presentation (Powerpoint or Youtube) explaining and demonstrating how the characteristics of a drainage basin (human, soil, vegetation, shape, drainage density etc) affects a storm hydrograph). How can we use this to predict river flooding?


You will need to research this using your text book and the internet. Here are some potential sources of information: 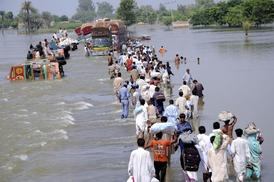 Case Study: River Flooding
Create a set of case study notes explaining the natural and human causes and consequences of the Pakistan Floods, 2010.
You may find some resources below (do not forget to look for your own too)
Possible sources 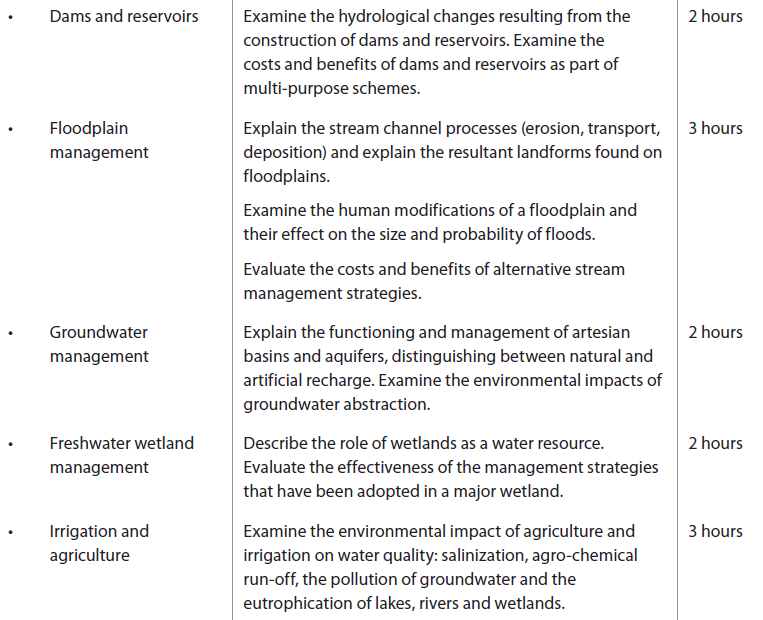 You are going to split into pairs. Each pair will have to create a revision factsheet on one of the following (all diagrams should be done by hand):


Use the two PowerPoints below to help you.
OR

An alternative task could be to make a video (screen capture or iXplain) where you record the drawing of the diagram and then overlay the auditory explanation.

Human Modifications (Urban Hydrology): Humans can change the hydrology of rivers in many ways. Below is a summary of some of the most common. Your task is to find an example of each of these and briefly outline the key points.

Sort activity: We have already previously looked at the Pakistan 2010 floods. If you were the government of Pakistan which river management strategy would you pick for the Swat valley and why? Create a proposal of your top 5 ranked strategies and your worst 5. After this, discuss the criteria of what is best to worst what factors should we consider and if they are not useful to the Swat valley in which situations might they be more useful?

Deconstruct the Case Study document. The language used is intentionally challenging, I want you to try to pick out the relevant information (note taking skills are important_To do this you will need to consider certain areas:


Impacts due to over-abstraction

Wetland:  is an area of land whose soil is saturated with moisture either permanently or seasonally. Such areas may also be covered partially or completely by shallow pools of water. Wetlands include swamps, marshes and bogs. The water found in wetlands can be saltwater, freshwater, or brackish (a mixture of fresh and salt water). The world's largest wetland is the Pantanal which straddles Brazil, Bolivia and Paraguay in South America.

Using the above YouTube and the following link create a Spider Diagram (you may use Coggle) outlining the types of wetlands and explaining the importance of wetlands.

The Value of Wetlands 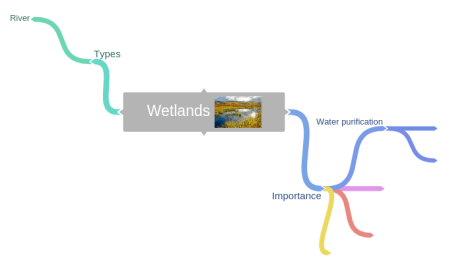 Case Study
Kissimme River
Other sources
Use the Course Companion pg. 129 and the US Gov. Website

Conflict at the local scale:
The Murray-Darling Basin